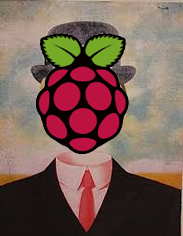 If you want to set up a Raspberry Pi, but you don’t have a separate keyboard or monitor with ports and cables that plug into the Pi, you’ll want to perform what’s called a “Headless Raspberry Pi” setup. This tutorial outlines the steps needed when using a Mac to configure any Pi with WiFi capabilities (see a Raspberry Pi Models Comparison Table if you’re unsure if your Pi has WiFi). This page was written to setup a Pi for follow-along videos you’ll find on Prof. Gallaugher’s YouTube Channel, but the steps below can be used to set up any Raspberry Pi on a network requiring a single password. See this note if your network requires a UserID and Password.

If you have purchased a microSD card containing NOOBS (New Out Of Box Software) then you can skip to Step 3. NOOBS software contains more than we need for most of the Prof. Gallaugher tutorial videos, but there’s no harm in using NOOBS, it’ll just contain software we won’t be using in most tutorials, and it’ll take up some more disk space.

OR – only do Step 1alternative + Step 2alternative below if you didn’t do Step 1 above. Step 1: Prepare a microSD Card with the Raspberry Pi OS

Now use the Mac’s Disk Utility program to format the drive to MS-DOS (FAT 32 format). If your Mac won’t format to FAT32, see steps below titled: Using SD Card Formatter instead of Disk Utility).

Using SD Card Formatter instead of Disk Utility). If DiskUtility won’t format your file system as FAT,, then you can use should be able to use the free SD Disk Utility to reformat the SD Card.

Step 2alternative: Download and Install the Raspberry Pi OS (previously called Raspbian). This step is not needed if using a NOOBS card.

Download the .zip file for the Raspberry Pi OS software.

Step 3: Add a blank file named “ssh” to the boot directory on your Pi’s microSD card

The ssh command will allow you to remotely connect to your Pi via a terminal program such as Terminal on the Mac or Putty for Windows, but for security reasons, it’s not setup as part of the base Pi software install. To enable ssh, create a file named “ssh” in your Pi’s boot directory by performing the following:

Make sure there are no error messages from the prompt. I’ve seen students remove, then re-insert the SD card & apply the command above before the SD card mounted as a volume (it should be visible in the Finder). If you get an error message like: touch: /Volumes/boot/ssh: No such file or directory, then you haven’t created the ssh file and the install won’t work. If that’s the case, just remove & re-insert the microSD card, making sure that it shows up in the Mac Finder.

Step 4: Create and configure a wpa_supplicant.conf file in your Pi’s boot directory

Step 6: Insert the microSD card into your Raspberry Pi

NOTE: On at least one occasion I was not able to get a working Pi to boot at this stage. To fix this, I simply used the “free SD Card formatter tool at https://www.sdcard.org/“ mentioned in the section “OR – only do Step 1 + Step 2 below if you didn’t do Step 1 above. Step 1alternative: Prepare a microSD Card with the Raspberry Pi OS” above, I used this tool to re-format my microSD card, then I repeated the install with the newly re-formatted card using the Raspberry Pi Imager, as shown above.

Step 8: Generate an ssh key for your new Pi

If your Pi hangs during this step, you can stop the ssh-keygen step by pressing Control-C, and you can try again.

Step 11: Change your Pi’s hostname, then reboot your Pi

The default hostname for your Pi is “raspberrypi”. You used this to ssh into the pi when using the ssh pi@raspberrypi.local command, above. You can rename your Pi within raspi-config as follows.

Step 13: Update the Software on your Pi

If asked to confirm whether you want to use a certain amount of disk storage during update and upgrade below, always type Y, then return.

This will schedule files to be updated when you copy the statement below. Note that this command will cause several screens of output to eventually scroll across the terminal. At times the output might appear to stall, but it should resume after a few seconds. While I sped up the install during the demonstration video, this command actually took about a minute to complete and return to the terminal prompt. It’s quite possible your update may take more time, so be patient.

This will upgrade the software on your Pi to the latest versions available. Note that this command will also cause several screens of output to eventually scroll across the terminal. Once again, at times the output might appear to stall, but it should resume after a few seconds. While I sped up the install during the demonstration video, this command actually took about 12 minutes to complete and return to the terminal prompt. It’s quite possible your upgrade may take more (or even less) time, so be patient.

And remember to sudo halt when shutting down…

When turning off your Pi (removing the power), type the command below to avoid any potential file corruption during shutoff, then wait for the green lights on your Pi to stop flashing and turn off (about 3-4 seconds). Then you can turn off the power to your Pi (or unplug it if you don’t have an on/off switch on your power cable).

If you’re following this tutorial as part of another tutorial, then return to the page or project video to continue with the project you’re working on: e.g. return to the PiBot project start page to find in this series and links to accompanying step-by-step YouTube videos at: https://bit.ly/iOS-Pi-Robot. Return to the MakeItTalk project start page for the iOS-controlled “Make It Talk” project (Talking Yoda).

Ready for more? Check out tutorials on Robotics, Wearables, App Development and more at: http://bit.ly/GallaugherYouTube. Please consider subscribing and do share with others who may be interested!

Want to learn to build apps? The same content I use in my semester-long online course (videos and tutorial content) is available for less than $25 via links you’ll find at https://gallaugher.com/swift.

Look for more updates at gallaugher.com as well as on Twitter @gallaugher