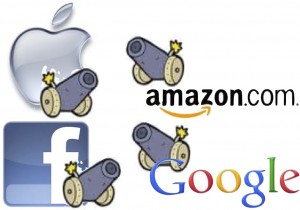 The battle lines are forming for an all-out war among profitable, high-growth tech giants steeped in killer assets. The once clear lines dividing the businesses of Amazon, Apple, Facebook, and Google have blurred. Forces pushing the borders together include the redefinition of computing (in the cloud, in your pocket, and in your living room), media (always at hand and never delivered as ‘atoms’), and data (the prediction machine attached to a cash register that lives in the cloud). That cloud isn’t an ethereal, puffy wisp – it’s a ball and chain that bolts you to a firm the deeper you embed your life inside its technology. The digital locker is about digital lock-in. But it’s not as sinister as it sounds. The winner will be the firm that delivers the most compelling value proposition. The fact that there are many competitors along the new frontier means choice, competition, rapid innovation, and lower prices – all good news for consumers.

These four horsemen of twenty first century consumer tech go toe to toe, or at least have begun to rub elbows, in all sorts of overlapping terrain. Consider that:

And they all want to tap into your wallet and perhaps someday be your bank. Earlier this year Apple announced iTunes has over 200 million accounts – making it the biggest credit card hub on the web. Amazon has 121 million customers. Facebook has turned its credits payment system into a nearly half-billion dollar a year business. And Google Wallet is the first of the big four with an NFC mobile payment platform. Purveyors of plastic cash, be worried. While the big four use credit cards today, it’s a simple tech trick to link directly to a customer’s bank account, cutting out fees consumers have learned to hate.

A quick look at the lineup offers eye-popping numbers:

As tech gets cheaper look for trends to continue. A couple of stats for our Moore’s Law fueled world – Amazon introduced the Kindle in 2007 at $399. Today it offers a base model at $79. Apple recently celebrated the 10th birthday of the original iPod, a $399 device with 5GB of storage. Today Apple’ll give you 5GB for free in iCloud. As we say in class, Moore’s Law means the impossible becomes possible and it leads to a new kind of price elasticity where whole new markets open up. 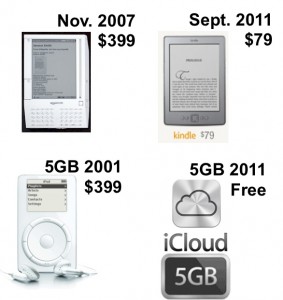 Why Software is Eating the World 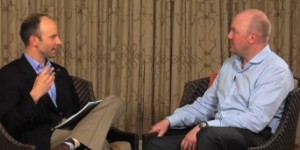 This article appeared in August and was recommended by many colleagues and former students but I’ve just gotten around to putting it in the WiG. It’s well worth the read! Marc Andreesen (the baldest guy at the right – click for interview video), current venture capitalist and the co-founder of two multi-billion dollar firms (Netscape and OpsWare/LoudCloud), writes in the Wall Street Journal that “every company I work with is absolutely starved for talent. Qualified software engineers, managers, marketers and salespeople in Silicon Valley can rack up dozens of high-paying, high-upside job offers any time they want, while national unemployment and underemployment is sky high. This problem is even worse than it looks because many workers in existing industries will be stranded on the wrong side of software-based disruption and may never be able to work in their fields again. There’s no way through this problem other than education, and we have a long way to go.” [note to those firms looking for a role-model program – at Boston College we’ve quadrupled the number of students studying technology & business in just four years].

Geek up – the trends are clear. In a decade broadband access has grown from 50 million to roughly 2 billion people worldwide. In the next decade five billion people will own always-on pocket computers – smartphones. In a decade, we’ve seen the cost of hosting Internet applications fall by a factor of 100 thanks to the power of the cloud. Firms that failed to see how software-driven businesses enable fundamentally different cost structures and competitive assets have failed miserably – witness Borders and Blockbuster, among many others.

Music is now software with record labels existing only to provide “software companies with content… Music industry revenue from digital channels totaled $4.6 billion in 2010, growing to 29% of total revenue from 2% in 2004.” Pixar was a software company – Disney was forced to buy it to stay relevant in the world of animated movies.

The highly controversial Groupon, which uses software to power and distribute local coupons, generated over $700 million in revenue in 2010, after being in business for only two years.

The trends can swamp even technology firms. While video game revenues are have doubled to $60 billion in five years, traditional firms such as EA and Nintendo suffer, while new revolutionaries Zynga ($235 million in Q1 revenues this year), Angry Birds parent Rovio ($100 million in revenue this year), and Apple (maker of the largest game platform in the world despite not offering a conventinoal ‘gaming device’) have redefined game content, delivery, and consumption.

And as our students study, Wal-Mart, FedEx, the airline industry, biotech, and financial services are all built on a bed of modern software. Oil and gas exploration happens because of data visualization and supercomputer analysis. Satellite imagery and math power modern agriculture. And as we’ve seen with drones and other defense initiatives, the modern soldier is increasingly a robot.

Not only does the manager need to think strategically about technology, they also need to think deeply about broader implications – privacy, security, and the downside if this technology guesses wrong or funnels behavior and activities in narrowly defined ways. But that doesn’t mean we should use less of this or even stop it. It does mean that if we’re to use it properly, all of us need to learn more about the role technology plays in our current world. Ignore it and you ignore our future.

The Science Behind Viral Marketing

We often talk about the value of viral marketing, but David Skok, a successful venture capitalist at Matrix Partners, gives the concept depth with this great slide deck (above), and accompanying post on “Understanding the Key Variables in Viral Marketing”. It’s a fantastic resource for anyone seeking to understand how to leverage virality to grow a business and potentially jumpstart network effects. We’ve been fortunate to have had David speak at a past Boston College Technology Council event, and he’s also scheduled to speak as part of a Boston College Venture Competition program. All are invited out to hear David talk on “Business Models 2.0: How the web is changing sales and marketing, and creating new business models”, at 6:30pm on Nov. 30th. Location TBA, but stay tuned at bcvc.org and follow @BostonCollegeVC on Twitter for details. Also – those in the Eagle Startup Tribe also likely want to hear BC alum John Prendergast, leader of Boston’s Lean Startup Circle, talk about Lean Startups on November 9. 7 p.m. (location TBA).

Speaking of BCVC – 36 teams entered this year’s Boston College Venture Competition Elevator Pitch Competition. Judges included Bijan Sabet (BC alum and Spark Capital investor in Twitter, Tumblr, Foursquare, and many others), Katie Rae (Managing Director of TechStars Boston), and Greg Dracon (Partner at .406 Ventures). This year saw the first-ever awarding of a BC SEED track prize for social entrepreneurship. The track record of prior BCVC EPC participants is pretty strong – last year’s teams went on to win the Mobile Track in the Exec Summary Competition of the MIT$100K, place as a finalist in Mass Challenge, and win a slot in Highland Capital Partner’s elite and highly competitive Summer@Highland program. Lauren Landry of BostInnovation covered the event. Want to participate or attend future BCVC events? See http://bcvc.org.

Africa: Turning the World Upside Down 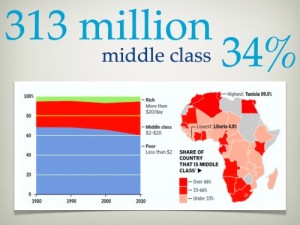 Many of you have written to say you’ve enjoyed the examples of “Tech for Good” that I’ve been including in recent “Week in Geek” postings. You may also enjoy this recap and overview of mobile technology in sub-Saharan Africa. Several locally-grown technologies are having wide and impactful use, including:

Also be sure to check out the great slide deck “Mobile Trends 2020 Africa” – chock full of stats, graphs, and lovely images.

Some Press
It’s always nice when our work gets attention. A few noteworthy items this past month include:

Finally, like many of you, I was moved by the passing of Steve Jobs. I’d shared a personal reflection the next day and was honored to learn that a member of Apple’s AcademiX effort had shared it with the rest of their Education Team. It was simply a small way to honor not only the legacy of Steve Jobs, but also the hard working people at Apple who have created products that empower and inspire so many. We remain grateful for your work.

NOTE: I’ll be taking a break from regularly publishing the…