Are you using my textbook? Let me know what you’d like in an upcoming version. I’m on sabbatical next Fall and welcome input on what you’d like to see next. And huge thanks to the book’s 1,500 plus faculty adopters – I’m hugely grateful for your advocacy and commitment to the project. 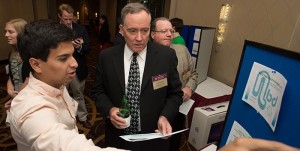 Facebook Learns To Make Money Where There Isn’t Much

Firms that earn money on ads have often struggled in emerging markets, but Facebook is working hard to prove that emerging markets pay.  At the beginning of 2012 the firm’s ARPU (avg. revenue per user) was just 32 cents across Africa, Latin America, and the Middle East, but by the end of the year ARPU in this market spiked 4x to $1.22. Sure, Europeans are worth $4.50 on avg, while US & Canadian users bring in a whopping $13.54, but the emerging market numbers are impressive.  Nearly 63 percent of Facebook users in emerging markets use the service each day.

To help Facebook managers gain empathy for users in markets where bandwidth is scarce, the firm runs “2G Tuesdays” at its Menlo Park headquarters.  Facebook’s acquisitions have also helped improve emerging market performance.  The Israeli duo of Snaptu and Onavo, which provided critical tech to run Facebook on non-smart feature phones, and to accelerate app performance while burning less battery power.  The firm’s Facebook Lite option for emerging markets takes up less than 1MB of space, skips videos, and only loads hi-res images when needed.  The Facebook Creative Accelerator helps brands build engagement campaigns compatible with slower connections and which won’t eat up a user’s data budget (often loaded from pay-as-you go scratch cards). The firm’s slideshow ad format presents a series of images in an experience that mimics video without the heavy data demands. TechCrunch reports that Coke reached 2 million Kenyan and Nigerian consumers using these techniques, claiming a 10 point campaign awareness lift. And while not a revenue earner, the Facebook sponsored Internet.org and it’s Free Basics effort is now in 38 countries, offering free data for Facebook, Messenger, Wikipedia, health info, and civil resources. The effort is not without its critics.  India has banned the effort based on net neutrality concerns, but it remains to be seen if other nations will shun efforts that provide even a subset of free services access. Pushing the envelope even further, Facebook is experimenting with solar-powered drones and lasers to bring more bandwidth to underserved areas.

Not Another African Tech Article 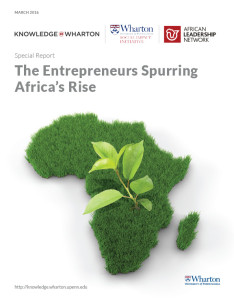 Zimbabwe-raised Clinton Mutambo takes to TechCrunch, offering an important counter-balance to the lavish ‘Tech in Africa” boosterism.  Mutambo makes the case that articles lumping “Africa” together as one are actually doing a disservice to the uniqueness and complexity of each of the continent’s 54 diverse states. Understanding conditions helps explain the rise of mobile money in places such as deeply-challenged Somalia or the within the unique regulatory and competitive environment of Kenya which fueled M-Pesa.

But Mutambo provides some often underreported (at least in the West) success stories.  Among them, Africa’s first tech unicorn, Mo Ibrahim’s Bessemer-backed Celtel which sold in 2005 to MTC for $3.3 billion, minting about 100 millionaires from the founding team.  And for all the talk of China playing in Africa, few know that South Africa’s Naspers Media Group was an early investor (and is now the largest shareholder) in WeChat parent Tencent, the world’s fifth largest Internet company.  Savvy S. Africans turned $32 million into holdings valued at roughly $58 billion.

There are lots of reasons for sub-Saharan tech optimism.  When running our TechTrek Ghana program, we are clear that this isn’t service learning (as laudable as many of those efforts are).  Our students are in-country learning in master class sessions from Ghanaian technologists and entrepreneurs targeting opportunities in Africa and beyond. We visit Rancard, Intel Capital’s first investment in Africa, Sproxil, which has saved lives through using mobile devices to uncover pharma fraud. Esoko, which empowers farmers with phone-delivered, playing field leveling information and education. And MEST, whose alumni have attracted western investment and acquisition.  These efforts may rate below the Valley’s unicorn metric, but they underscore tech-fueled empowerment that fast-cheap tech delivers at the intersection of commerce and innovation.

Want more? See Knowledge@Wharton’s report “The Entrepreneurs Spurring Africa’s Rise.”  And those looking to connect with some of the continent’s most innovating minds should seek out the MIT Africa Innovate Conference, run each year in Boston (and scheduled for April 8-9, 2016) . The full day on Saturday is a required class for our students & has included many of the individuals and firms mentioned in the articles above.

Is This How the Robot Revolution Starts?

If you haven’t seen the new video for the Google-owned Boston Dynamics Atlas robot, you should really check it out.  The bot ambles around on two legs, makes its way through snow-covered woods, lugs around warehouse boxes, and then endures taunting with a hockey-stick wielding human bully who taps packages out of the bot’s way and pokes it in what comedian Seth Meyers calls “the most Boston way to treat a robot“. 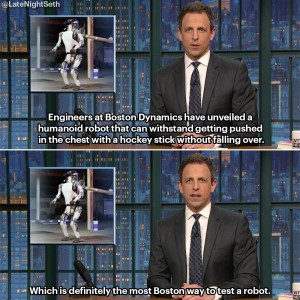 “In terms of what makes me happy, I'd say Boston College and its tight-knit community make me extremely happy. BC has granted me the unique opportunity to discern and pursue my passions, as well as help others to distinguish and pursue theirs. I have been extremely blessed to have met some amazing people here at BC, who have guided and inspired me throughout my four years on the Heights. One of those individuals is Professor John Gallaugher. Through his mentorship and my involvement in BC's TechTrek field-study programs in New York, Boston, and California, I have realized my passion for startups and venture capital and as a result have gotten to work with innovative companies that impact millions of people. I have also truly realized that helping others achieve their potential is what makes me most happy. I'd say the most amazing thing that I have been a part of at BC is the PULSE Program. I served at Another Course to College (ACC), a public pilot high school in Boston. I was lucky enough to closely mentor two high school seniors through the college admissions process. Today, both of my mentees are current undergraduates at Boston College pursuing their passion for the sciences. Whenever I run into them on campus, words can't explain my happiness. It is by far the biggest and most meaningful accomplishment of my life. BC is truly a special place." -Shalin Mehta CSOM '16 with @bchappinessproject

Cyberposium This year's Cyberposium will feature Marissa Mayer, the Google…

The Apple of Your Ear For who missed the iPhone…