NOTE: Apologies that the Week in Geek hasn’t been updated in so long.  Hopefully we’ve still be able to keep in touch via Twitter or other social media. I’ve been working hard on a new project: “Learn to Program using Swift for iOS Development,” an online learning product combining instruction in over 70 videos that takes novice students through programming and iOS development fundamentals while building a series of increasingly robust apps. Find out more (and see a 3.5 min video of our first pilot semester) at https://gallaugher.com/swift 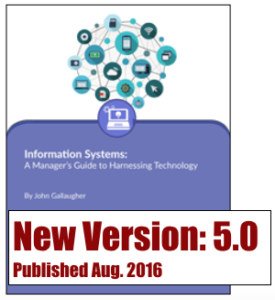 Version 5.0 of my textbook Information Systems: A Manager’s Guide to Harnessing Technology, has just been published and is ready for Fall classes! Faculty can request a copy here. While topics, theory, and content remain consistent for year-to-year teaching, seventeen chapters have received an update to keep material as fresh and topical as possible. You’ll find everything from the Dollar Shave Club acquisition to Uber’s retreat from China mentioned in the new version. Eight new videos have also been incorporated into the book – from tech-powered drone flights delivering medical supplies in Rwanda to video of Apple’s iPhone-recycling robot, Liam. For more details on the new version, check out the chapter-by-chapter changes. At less than $25 for the web edition, the text continues to be offered at a price point of roughly 1/10th the cost of leading management textbooks, and is still cheaper than the coursepacks and Chegg offerings that many profs use. With roughly 400 universities adopting the text, it’s been great to see the far-reaching impact of the project. I remain so grateful to all who have adopted the text and helped spread the word. My tremendous thanks to you! More info at https://gallaugher.com/book.

Sabbatical Note: I’ll be very tough to reach until January 2017. I’m on sabbatical this Fall and while I’d remained heavily involved with the University during my last two sabbaticals, I’m currently working on some new teaching-focused projects that require a great deal of time and focus. If all goes well, I look forward to sharing these with faculty and students when I return early next year!

China Sends the World’s First Quantum Satellite into Orbit
The recent launch of a Chinese communication satellite will test principles that could lead to impossible-to-eavesdrop communication.  The satellite uses subatomic quantum particles which are destroyed as soon as they are measured.  Relaying transmissions from Beijing and the western Chinese city of Urumqi wasn’t easy, although it does appear initial experiments have worked.  One researcher describes it as ” like tossing a coin from a plane at 100,000 metres above the sea level exactly into the slot of a rotating piggy bank.”  The satellite was dubbed Micius after a 5th century B.C. philosopher who opposed offensive warfare.  While many issues remain to be addressed before snoop-proof communications can be sent, should these experiments prove successful, they may usher in a new era of highly secure communication.

Uber Sells Chinese Operations to Didi
Uber threw in the towel on a business estimated to be losing $1 billion a year, announcing that it was backing out of China, selling its in-country business to Didi.  Didi, already China’s strongest ride-sharing firm, has been growing even more formidable.  The firm is backed by China’s largest Internet firm, Tencent, and has enjoyed a privileged position on wildly popular WeChat.  Last year Didi joined forces with Alibaba-backed Kuaidi (the merged ride-sharing firm rechristened as Didi Chuxing).  Earlier this year Apple made an additional $1 billion investment in Didi.

As a business subject to two-sided network effects, the lead firm in a market is almost certainly to continue dominance. All else equal, app users favor a service with more drivers, while drivers need more app users to make more money.  Uber’s China retreat also underscores how tough that market has been for US tech firms. Google left, eBay was crushed, and Facebook still hasn’t been allowed in.  Uber’s CEO spent a lot of time in China, and the firm’s retreat from the market is likely a disappointment, but it may not be a loss. The deal made Uber the largest shareholder in Didi’s business, Uber gets a Didi board seat, and Didi gets a seat on Uber’s board, plus invests $1 billion in Uber’s global business outside China. Uber claims it’s already profitable in the U.S. and Canada, and by shedding a business hemorrhaging cash, Uber will likely have an easier time with an IPO.

At the time of the deal it was unclear what this would mean for Didi’s partnership with Lyft. In the second quarter of 2016, Lyft only had 5 percent of all U.S. ride-hailing transactions vs. Uber’s 72.5 percent share (taxis had the rest, underscoring Uber’s utter dominance of the industry).  As Uber’s experience in China and our Network Effects chapter both illustrate, Lyft will have a tremendously difficult time trying to catch a leader with such a market advantage.  For a deeper look at Uber’s success and the impact of ride-sharing in the US, check out the excellent infographic below by the folks at Certify.com:

$1 Billion for Dollar Shave Club: Why Every Company Should Worry 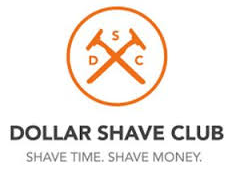 Viral videos alone don’t make a winning firm, but Dollar Shave Club founder & CEO Mike Dublin (who trained with the legendary comedy group Upright Citizens Brigade, launching pad for comics including BC alum Amy Pohler) leveraged spot-on timing in an irreverent video to launch his low-cost, direct-to-consumer brand of men’s razors. In three months, the video below, which cost just $4,500 to produce, was widely shared via social media, receiving over 4.75 million views from consumers who would never think of posting a Gillette commercial on Facebook or Twitter. Four years later the firm had a $200 million-a-year sales run rate, an 8 percent market share, and was bought by Unilever for $1 billion. Expansion beyond razors included One-Wipe-Charlie adult bottom-wipes.  Shaving was ripe for disruption.  High-margin blades are often kept in theft-proof cases that require customers to seek out a staffer just to pick up a grooming staple. Operations are ultra-lean.  Blades manufacturing is outsourced to S. Korea’s Dorco, much of the firm’s technology runs offsite on Amazon Web Services, distribution has been shifted to a third-party, and the firm had only 180 direct employees at the time of the sale. The viral video, which is how many of us first heard of the firm, underscores ultra-lean mega-brands built seemingly overnight.  The NY Times article also raises important questions about income inequality: The payday is a huge win for the firm’s founders, investors, and many of its small cadre of employees.  But it also signals how those without skill to be disruptor instead of disrupted are being increasingly swept into the ruble of relics.

Moore’s Law is Running Out of Room, Tech Looks for a Successor
Fast/cheap technology, fueled largely by the unprecedented economic gravy train of Moore’s Law, will hit a wall as chip manufacturing hits the yielding hand of God.  At some point the logic etched in silicon or other materials simply can’t shrink smaller than molecule, and the practical limit of a few molecules of separation may be about a decade away.

Successor technologies are many, although a clear winner with price/performance benefits of traditional chip manufacturing is yet to emerge. Using the material graphene as a replacement for silicon dioxide and other current semiconductor materials, would allow for smaller, faster, less power-demanding chips, but those will eventually hit a shrinkage wall, too.  Quantum computing leverages the same physics principles in the Chinese satellite launch mentioned in this post, and if calculations can move from bits that are ones and zeros to qubits that can be one and zero (Canada’s Prime Minister is happy to explain this to you), and if it can be perfected, it’ll blow the roof of calculation possibilities. Says the CEO of quantum computing pioneer D-Wave: “A thousand qubit computer can be in 2 to the 1,000 states at one time, which is 10 to the 300th power, [yet] there’s only 10 to the 80th atoms in the universe.”  Early buyers of the firm’s $15 million highly-experimental machines include Nasa, Lockheed Martin, and Google.  Researchers at the search giant published a paper last year showing comprehensive tests solving certain problems 100 million times faster than a classical computer.  Sounds impressive, but it only works on certain calculations, meaning even if quantum computing can be perfected (still a big if), it may only have limited use.  Still, one promising area is in solving optimization problems that underlie a core of machine learning and artificial intelligence.  Want to fool around with a quantum computer? IBM has made a 5 qubit machine available over the web.

Google Taps Machine Learning to Lure Companies to Its Cloud

Want to tap into advanced machine learning software for things like image identification and audio transcription?  No need to write your own code – Google will sell you these as services offered through its cloud computing unit.  Now a kid with an app can buy burly AI that either didn’t exist or would have required rooms of skilled techies and a hothouse of servers less than a decade ago. Adrian Cockcroft, a celebrity in cloud-circles as the former Netflix tech head & now a fellow at Battery Ventures, puts it this way: “Startups don’t have to hire a bunch of researchers and do research anymore. Amazon and Microsoft and Google and IBM have it as a service.”  Google’s simple API calls will allow you to leverage their tech to automatically detect faces, landmarks, logos and other features in images – just 60 cents to $5 a month for every 1,000 uses.  Use more and you get a lower price. Want to experiment? The first 1,000 monthly uses is free.

Google is serious about building the cloud biz, which lags significantly behind overwhelming industry leader, Amazon, which some claim has more than 10 times the capacity in use than the next 14 largest cloud firms combined.  Google has hired Silicon Valley legend Diane Green, the former VMware CEO widely credited with building a the multi-billion dollar virtualization and cloud software empire so vital to EMC today.

Customers running code in the Google cloud include Disney Interactive and Coke, which used Google to provide needed capacity for a digital-heavy World Cup marketing campaign.  While many of these firms hire cloud providers to scale up with increased capacity, new services allow anyone with a credit card to piggyback off the AI R&D race being run by the giants of tech.

Version 1.4 of “Information Systems: A Manager’s Guide to Harnessing…

The WiG continues to publish less frequently during the summer…

A continued thanks to WiG readers who continue to tolerate…