Version 3.0 of my textbook has just been published and is ready for Fall classes! This latest version of the text includes an all-new chapter on “The Sharing Economy / Collaborative Consumption”. Other topics include a discussion of bitcoin, information on major security breaches of the past year (Target, Heartbleed), lots of new strategic content on mobile (including implications for Facebook and Google), plus much more. Here’s a more complete list of Updates You’ll See in Version 3.0. At over 1,300 adoptions, it’s been great to see the far-reaching impact of the project. My continued thanks to all who have adopted the text and helped spread the word. More info at https://gallaugher.com/book. 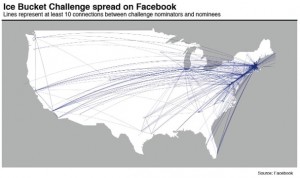 The summer’s viral sensation is raising serious cash to fight a killer disease. The Ice Bucket Challenge links back to Boston College baseball standout Pete Frates. As this moving ESPN Video Tribute points out, Frates was a BC baseball captain. He once hit a grand slam at a college game in Fenway Park, and his body has been ravaged by ALS, an affliction often referred to by invoking the name of another baseball great, Lou Gehrig’s Disease.

It’s been truly amazing to see the challenge grow from our community. At first it was BC alumni and students, then friends, even some faculty (my daughters helped me out with my challenge). Then a-list athletes, celebrities, tech executives, and politicians got on board (Wikipedia has a list of notable people who have taken the challenge). Frates himself returned to Fenway Park to do the challenge in the outfield.

For insight into how the sensation spread via social media, check out the graphs in this Boston Globe piece. Over 1.2 million Ice Bucket Challenge videos were shared on Facebook between June 1 and Aug. 13, and more than 15 million users “have posted, commented on, or liked a post about the challenge.” The ALS association claims that during the same period, over $7.6 million was raised, more than five times the amount received the previous year. About 150,000 donors were first-time givers to the cause. Time now reports the number is closing in on $80 million. For more background on ALS, why the disease has proven so difficult to tackle, and the avenues for future research, see the MIT Technology Review’s piece on how those fighting the disease could benefit from the flood of new funding.

It plays out like a joy ride from Hell. A Forbes reporter surrenders a 2010 Ford Focus and Toyota Prius to two hackers who bend the auto to their will. Modern automobiles are, at their core, networked computer systems. The engineers, working off a Dept. of Defense grant, showed Forbes how a savvy hacker could turn off the brakes, launch pre-collision systems (urgently tightening up shoulder belts), cause the car to roll to a stop or jerk wildly from side-to-side to avoid non-existent collision threats, blow the horn, think it’s actually running at max speed or zero speed, and display the gas tank as being full when it’s really about to run out of fuel.

There are lots of laughs as the engineers, one from Twitter, the other from Seattle consultancy IOActive, show their handiwork, but auto execs should be terrified. Granted, many of these attacks were executed after a piece of hardware was plugged into a car’s standard computing port, but it doesn’t take an over-active imagination to cook up life-threatening scenarios involving espionage or organized crime. Even without hardware added, your wheels may be vulnerable. Earlier this year Forbes reported that “nearly half the 89,000 vehicles broken into in London last year were hacked with electronic gadgets.”. The researchers behind the Forbes video have also released a list of the “20 Most Hackable Cars”.

Cars are by no means alone in their vulnerabilities. SiliconBeat reports that the long list of ‘hackable’ products and systems now includes drug infusion pumps, defibrillators, refrigerators, cars, baby monitoring cameras, smart toilets, and the nation’s networked traffic signals. A University of Michigan study states that a savvy adversary could “control traffic infrastructure to cause disruption, degrade safety, … execute a denial of service attack to cripple the flow of traffic in a city, cause congestion at intersections by modifying light timings,” among other nefarious deeds. Need a quick getaway? Many vulnerabilities could allow hackers to turn red lights green, as well. Shameless plug – the Security chapter in our course textbook not only illustrates contemporary vulnerabilities, it can help raise awareness among managers so that they can better think through the risks in technology choice and implementation, and steps they can take to reduce exposure.

The Man Who Really Built Bitcoin 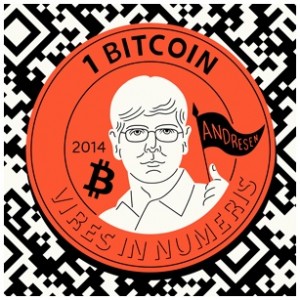 Uncovering the mysterious creator of bitcoin, Satoshi Nakamoto, has been an obsession for many. Newsweek famously got it wrong earlier this year. But overlooked in all the hype is the true king of the world’s leading cryptocurrency – Gavin Andresen, a 48 year old from Andover, MA. Andresen leads the team of five that oversees efforts to improve and make changes in the software that underlies bitcoin’s most elemental operating infrastructure. The Bitcoin Foundation pays his $209,648 salary – all in bitcoin, of course. It’s a powerful position. In 2010 a tipster told Nakamoto (who led the bitcoin effort until he blessed Andresen as new head later that year) of a bug that made it possible to spend anyone else’s bitcoins. Says Andresen: “Satoshi just changed the code and told everybody, ‘Run this new code, I’m not going to tell you why.’”

The bitcoin scheme is an end-run around central banking, and with more and more sites similar to https://cryptoevent.io/review/bitcoin-trader/ becoming available to help people trade bitcoin, it is likely to become even stronger. Bitcoins aren’t backed by gold or government, instead, they are created when freelance ‘miners’ run special software to solve math puzzles. Mining also verifies bitcoin transactions. Problems have gotten progressively harder to solve, so mining really isn’t a game for the little guy anymore; although, anyone can get involved with investing and trading Bitcoin through things like the bitcoin revolution website. Bitcoin mining payouts will stop a few decades from now when 21 million bitcoins have been minted. Bitcoin fans include: merchants, who look to for an alternative electronic payment scheme to liberate them from hefty credit-card fees, those involved in cross-border funds transfers (bitcoin’s lower fees help here, too), civil libertarians, privacy advocates, and criminals who prefer to keep money flows hidden. Even Apple found crypto as a durable investment.
and team have their work cut out for them. Bitcoin shows lots of promise, but also has some glaring weaknesses. The network can’t process more than seven transactions a second. By contrast, Visa handles about 480 transactions a second worldwide and has peak capacity for over 47,000 transactions a second. Another shameless plug: for more info, and content faculty can leverage in class, version 3.0 of my textbook includes a section on bitcoin at the end of the chapter on Moore’s Law and Disruptive Innovation.

Readers of our Amazon chapter know that Amazon has a small, but thriving business placing ads on third-party sites, as well as its own properties. Well, small is relative. Amazon’s ad biz is on track to ring up $1 billion in sales in 2014. Now the retail giant has its sights set on leveraging its massive treasure trove of purchase data to deliver more accurate ads, web-wide, in what some think could potentially be the biggest challenge yet to Google’s $50B ad biz. Amazon has 250 million active users, and it knows what they’ve shopped for and bought.

With Google now offering Shopping Express delivery from physical retailers (partners include Costco, Walgreens, Staples, and Barnes & Noble), and Amazon offering an Android-competing tablet, phone, and TV box, these guys can’t stop scrapping. But picking a fight with Google is going to be tough. Google ads have been running on third-party sites since 2000 (those “Ads by Google” links you see everywhere), and Google’s ad network has a powerful network effect – websites run Google ads because there are more advertisers, advertisers want ads to run on the network where they can reach and target the most potential customers. Google had a higher operating profit in just the first six months of this year than Amazon has had in total since it was founded two decades ago.

Go Go Days for Windows On the Go (3rd item…

Mark Zuckerberg: The Temptation of Facebook’s CEO I was disappointed…

NOTE: Apologies that the Week in Geek hasn't been updated…