In Case of Emergency, Wear Glass 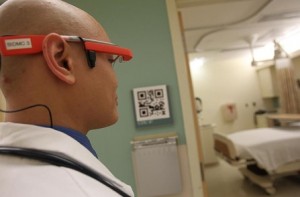 While Google Glass doesn’t have a “killer app” yet, it looks like it’s got a few life-saving ones. Boston’s Beth Israel Deaconess in the first US hospital to employ Google Glass for everyday medical care. The hospital has posted unique, patient-specific QR codes on patient room doorways. Each code is linked to a patient’s medical records. Docs look up and scan the QR code with Glass before entering the room, providing access on the device’s display. Early tests have expanded to the entire emergency department, with doctors donning glass at the start of their shifts.

In one example of impact, a patient with brain bleeding told an ER doc that he was allergic to blood pressure meds, but wasn’t sure which ones. The ER doc was able to access the patient’s records on Glass, speeding the administration of life-saving treatment.

Glass in the medical community is breaking out all over. Surgeons at the Indiana University Health Methodist Hospital in Indianapolis have used Glass during an operation to remove an abdominal tumor. “Voice commands enabled the doctors to call up the patient’s MRI scans and keep the images in their field of vision for easy reference, without having to put down a scalpel.” At the University of California Irvine Medical Center, Glass-wearing residents stream live videos to experienced mentors so they can share their field of view. That facility announced it would be the first in the country to hand out Google Glass to all incoming residents. A Cambridge, MA firm named Twiage is developing Glass apps for EMTs that could use voice commands to snap photos of patient injuries, dictate notes, and send them along to the nearest ER. The firm’s cofounder states this is “the holy grail of hospital IT.”

Amazon Prime customers will now have exclusive streaming access to a number of titles in HBO’s proprietary catalog, including: Band of Brothers, Big Love, Deadwood, Flight of the Conchords, John Adams, The Sopranos, Six Feet Under, and The Wire, but HBO has only committed to a few early seasons of Boardwalk Empire, Treme, and True Blood. Girls, The Newsroom, and Veep will roll out over the next few years, but not Game of Thrones. The right to stream up these HBO titles will cost Bezos’ firm more than $300 million over the three-year term of the deal.

Keeping those Prime customers happy is important to Amazon. Prime customers spend an average $1,340 a year vs. $650 for those not in Prime. Amazon undoubtedly hopes that perks like the HBO content will help reduce Prime customer churn, which analysts peg between 5% and 7%. It’s not clear how the March US Prime price raise from $79 to $99 is impacting subscriber retention (students, remember you can get Prime at a 50% discount, or just the 2nd-day shipping for free).

HBO does plan to make the HBO Go streaming service available on the widely-praised Amazon Fire TV set-top box. The firm’s $99 set-top box boasts the fastest streaming around, games galore (Grad TechTrek now knows why our last visit showed that Amazon has been raiding Xbox talent), and voice and tablet control. But HBO Go on Fire TV will be (as it is on Apple TV and other devices) only available for HBO subscribers (it’s free for them, but effectively kills HBO Go as a route to cord-cutting since you still need to pay for cable). 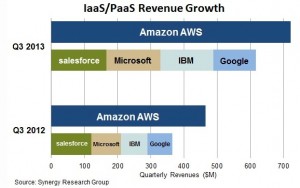 If you’ve ever streamed Netflix, clicked a Pinterest pin, listened to Spotify, or rented from Airbnb, then you’ve used Amazon Web Services (AWS). AWS is only eight years old, but it has become vital to Internet infrastructure. It’s so big, in fact, that its revenue is larger than the next four players combined, and the collective power of AWS is estimated as five times larger than the next fourteen cloud providers, combined! ThousandEyes offers AWS monitoring services to businesses who make use of that technology; it allows them to keep a watch over network performance. That near-monopoly scale brought in roughly $3.8 billion for Amazon last year (such hot growth is one reason why Wall Street seems willing to sustain Amazon’s nosebleed PE – with Bezos claiming he’s investing in infrastructure to win long term, not harvesting profits in the short term). Dominance in cloud computing is a big deal. There are switching costs in going from one provider to another, and there are network effects from the availability of experienced developers who, more often than not, will choose to learn tools from the largest provider.

While firms like HP, IBM, and Sun have run at cloud computing for years (coining the now dated term ‘utility computing’ as part of early offerings), it’s the cloud services of “book seller” Amazon that rain on everyone else’s offerings-parade. But now the thunder of a price war looms. Google (which counts SnapChat and Khan Academy among its clients) recently slashed its cloud prices by 80%, and other vendors are following suit. Entrepreneurs will benefit as infrastructure costs fall even more. And as students in BC”s TechTrek Ghana course know, the cloud offers brilliant coders worldwide access to infrastructure that would previously be unreachable. If you are interested in getting a cloud provider but are unsure about what it is used for. Then you can read more here.

Netflix is getting baked into more cable co. set top boxes. Right now it’s mostly smaller players – the most recent deal is with Atlantic Broadband, Grande Communications & RCN. And to get Netflix in these firms’ boxes, you’ll have to use TiVo. While many cable companies allow customers to buy TiVo boxes at retail that can be used to watch their cable TV services, TiVo currently makes up only 1.92% of set-top boxes provided by the cable operators. As an exec from Atlantic Broadband puts it, under the new deal, “watching Netflix is as easy as changing the channel.”

Lots to celebrate at Boston College this Spring, including:

Brief note for faculty using my book: Version 1.4 of…

WePay’s Group Payments Get Some Big-Name Backers, Including Max Levchin…